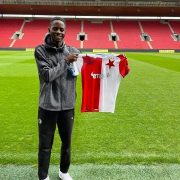 In a social media post, the Right2Win President noted that Mr. Ogbemudia has continued to make sacrifices which has yielded results of moving players abroad.

After acknowledging others that were part of the players’ move to Czech Republic, he said “I’m also not forgetting Nigeria’s top agent Eddie Iseri Ogbemudia for all the sacrifices and work he had been doing all these years, you know we are in it for the long haul”

In his own words, Mr. Eddie noted that it’s always a privilege to render professional services when it comes to contractual situations.

“We are glad, this partnership has continued to yield results, we are also willing to do more, congratulations to Right2Win Sports Club, we wish the boys well in their new abode.

FIFA CLEARING HOUSE- What you need to Know By: Eddie Iseri Ogbemudia
Scroll to top