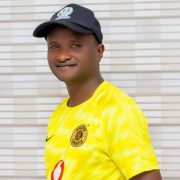 Registered football intermediary Eddie iseri ogbemudia has applauded the hard work and the level of transparency the interim management committee (IMC) has shown so far as he further urges disgruntled individuals to shield thier sword against the committee.

Also a sports consultant, Eddie revealed that the committee has done a good job in making sure that the NPFL 2002/23 Kicks-off regardless of the format and how they have been accountable to the public in their dealings, Sports247.ng reports.

“I want to use this great privilege to commend the interim management committee that has been put in place to run the affairs of the league for this current season although I’m someone that’s so biased with domestic league as I speak to you, the only cub that I support as a fan is Warri Wolves and they are currently in the NNL.” the player manager stated.

“Due to my passion, I believe if you have been following me for some time now, you will see how far I have come with them and because of the delay in the league starting someone like me that’s passionate about the domestic league will be missing a lot.”

“I’m very happy that the league will be kicking off soon and I just want to use this opportunity to appeal to everyone that might not be too happy with the way the league will be run for this current season talking about the abridged league to shield thier sword and let’s see what happens, the outcome before we react fully,” Eddie advised.

“Kudos to them, I want to commend the IMC because you can see that they are ready for business because for them to state that there will be money involved which is unlike the previous experiences we have been having that clubs will participate in the league and they don’t know what they stand to gain at the end of the league but you can see that almost everything is being spelt out.”

“Recently, I heard that there will be a formal presentation of that they are ready to doll out to the clubs and everyone that will be involved. It’s a commendable step I must commend the Hon. Elegbeleye, the head of operation Davis Owumi and all the board members that are part of the IMC.”

“I just want to appeal to them to turn from the old ways and let them do something unique that they will be remembered for in a long time.”

Follow Me!
Followon Twitter
New Rules for Football Trials – What you need to Know By: Eddie Iseri...