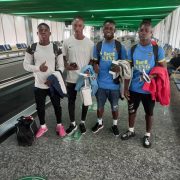 Four young aspiring professional footballers are scheduled to depart the shores of the country for Istanbul, Turkey on Sunday April 4, 2021 for trials.The exercise is facilitated by Golden Boot Football Club, one of Nigeria’s hub for football exceptional talents based in Owerri, Imo State.The players will take part in different Football trials which has been put in place by Turkish Football outfit Pelican Sports Club Sportive Activities Limited Company.The players, James Anthony, Kalu Chibuike Ogbonnaya, Kings Peter Ngozi and Anyim Chinaza Eze will be in the Turkish capital till 24th April, 2021 in search of greener pastures.If successful, they will be given opportunities in Turkey to begin their professional football career.President of Golden Boot Football Club, Mr. Nwanmeri Sunday Ikedinobi who expressed his delight with the development charged the boys to be good ambassadors of the club and the country at large.”I’m hopeful that the boys will show the stuff they are made of when they get to Turkey, it’s a lifetime opportunity that can transform their Football career, so it’s pertinent to be good ambassadors of Golden Boot Football Club and Nigeria as a whole”.On the part of Myron TopClass Sport Outfits, partners to Golden Boot FC, their principal officer Mr. Eddie Iseri Ogbemudia corroborated the words of the club President, he added that there is a need to be at their best when they get to the field of play.”As a serious business that Football is, from the blast of the whistle, the boys must show the willingness to become future contenders”.The players have also promised to give all it takes to secure their spots.